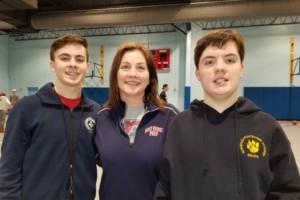 When his brother’s special-needs basketball clinic shut down, Holy Ghost student John Burke created his own. Burke, 17, a junior on the basketball team, had an idea. That thought evolved into something singular for over 40 special-needs children in the Bucks County area. Spurred by the closing of a local basketball program his autistic brother Tony attended, John took the initiative to do something about it. For four Sundays last winter, Burke, with the help of over 40 Holy Ghost classmates, has run the Junior Firebirds Clinic, a basketball outlet for special-needs children like Tony, 16, and their families. Read more.